Making Sense of the Halloween Franchise

Article below does contain mild spoilers for Halloween Movies.

Most people have watched one or more movies in the Halloween Franchise. Those who try to watch them all are met with a mess of continuity problems as different directors, writers, and studios, have gone their own way several times. Did you know there is a way to navigate all the movies in ways that will make them easier to understand?

Articles like this exist elsewhere on the Web but this is The Geek Post’s attempt to present the information in a very easy to follow format.

First A Bit About The Franchise

The entire franchise started out with a meek $300k budget, 21 days of shooting, and using a mask of William Shatner that cost less that $2 to create the iconic Michael Myers look.  The Halloween Franchise has since spawned 13 movies, multiple comic book series, a documentary, a novelization, young adult novels, online stories, merch, and a rabid fanbase. Each movie has its fans as well as its critics and they are usually very vocal on both sides. Regardless, it is the characters that people go to see and love to read about. All the movies have Michael Myers in them as the main villain, except for one, Halloween 3. Michael appears in Halloween 3 for a moment on a television screen as the first movie plays in the background. Developers had wanted to take the franchise in a different direction telling multiple Halloween themed stories. Fans wanted Michael however and that is what they have gotten.

Watch in Order of Release

Want to just watch the movies as they were released? In this order there is no rhyme or reason as the timelines are all jumbled up and not easy to follow. As the series has been rebooted a few times this is the most confusing way to watch them.

The original order is the list of Myers movies before the reboots began. There is some continuity problems still as there were many directors/writers. Some include Halloween 3 Season of the Witch in this order in spot #3. If there had never been any reboots this would be the entire cinematic Michael Myers universe.

Halloween 3 Season of the Witch in and of itself is a great 80s horror movie. The only reason it was rejected by so many was because Michael Myers only appears for a brief moment on a TV screen as Halloween 1 plays in the background of a scene. As of now, the only movie in this timeline is Halloween 3 and it has nothing to do with the other movies. The reason we are giving it a timeline at all is because in the 2018 Halloween Silver Shamrock masks are seen, we think it was more than a homage to Season of the Witch, we fully expect to see the anthology timeline come back. (wishful thinking maybe)

This is the “sister” timeline where Laurie Strode is Michael Myers sibling and he is going after her. While this is true in the other timelines as well these four movies constitute the first timeline that attempts to tell the full story including Laurie. It removes all of the other movies from continuity.

The H40 (most recent) Timeline

The most recent three Halloween movies completely remove everything except the original movie from the timeline. Laurie Strode returns (Jamie Lee Curtis) and it is 40 years after the first movie. In this timeline Laurie is not related to Michael and Michael Myers is presented more as a serial pyschopath rather than a supernatural force. John Carpenter returns as an executive producer and as the composer of the new musical score.

This timeline is known as H40 because of the 40 year jump in time, just like the H20 is 20 years later in that timeline.

As a long time fan Rob Zombie set out to make a Halloween movie that told the story from a different prespective. With the bless of his friend “John Carpenter” to make the movie his own Rob set out to make Michael Myers more unpredicable, scarier, and more cerebal. After the success of the first movie and taking a break Rob Zombie returned to make his version of Halloween 2 as well. These movies are true reboots of the franchise and gives us a much deeper look at the character of Michael Myers from Zombie’s perpective.

Elvira, Mistress of the Dark Collectible 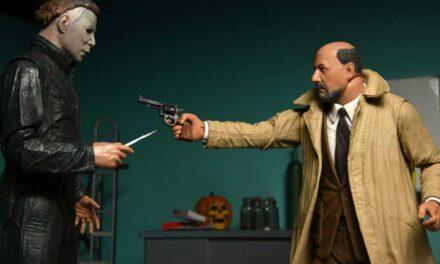 The Geek Post may earn a commission from any product link you follow on our website. As an Amazon Associate, we earn from qualifying purchases.You can read more about our promotions/affiliate statements by clicking here.